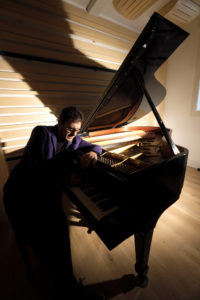 Pianist Giovanni Maria Varisco (1961), graduated in 1982 from the Conservatory of Lecce where he studied under Maestro Giovanni Nenna and Maestro Sergio Perticaroli.
Over the three years following his graduation from the Conservatory, he attended advanced piano training courses at the University of Music and Dramatic Arts, Mozarteum, in Salzburg.
In 1998, he played in a contemporary music group, Y2K, giving recitals with top-ranking musicians such as Mario Caroli and Guido Arbonelli.
In the 1990s, he won a scholarship to study at the Moscow Tchaikovsky Conservatory.
During his time there, he had the good fortune of meeting Maestro Valerij Voskobojnikov with whom he gained further understanding of the instructional and interpretative techniques of the Russian School, benefitting from his precious teachings connected primarily to the School of Maestro Nehuaus, the greatest interpreter of which being Sviatoslav Richter.
During this time, he performed the Tchaikovsky’s third posthumous sonata in the presence of Maestro Ashkenazy.

He has played in numerous important European music festivals:

He has also worked on contemporary music repertoires with composers Riccardo Santoboni, Francesco Giammusso and Riccardo Giovannini.
He gives recitals throughout Italy and receives reviews in both the Italian and international press.
He has been described by the likes of Erasmo Valente, Renzo Bonvicini and Enrico Cavallotti as a musician of immense sensibility and character.

… “when this concert pianist plays, it is as if he wishes to embrace, enclose and condense into every page of every composer all the music of the universe and all of history” …

His performance on live national television at New Year, 2000, of Gershwin’s ‘Rhapsody in Blue’ with the Philharmonic Orchestra of Sarajevo, directed by Maestro Emir Nuanovich, was followed in 2001 by his performance, again under the same conductor, of Hayden’s Concerto in in D major at the Festival of Farfa.
His subsequent programme was to see him playing Rachmaninov’s piano concerto n. 2, however, in 2004, he was involved in a terrible car accident.
The ordeal which followed involved innumerable operations and nine years on dialysis before finally receiving a kidney transplant in 2015.
Notwithstanding his undeniable physical difficulties yet pushed and supported by his unwavering love of life, he returned to perform recitals of challenging technical complexity.
He made three CDs of piano improvisation, a practice he came upon in the early days following his accident when, unable to play repertoires of classical music, new horizons of musical research were revealed to him.

2013 – “La Matta” group of jazz and contemporary music was created

2015 – He joins the ranks of artists in Monica Santoro’s arts agency, “Worlditalyonstage”, in Buenos Aires, Argentina

2016 – He gets back in contact with Russian cellist Elena Skvortzova, with whom he had previously played in Moscow, followed by a successful musical collaboration of twentieth century and contemporary repertoires.

Since 1988 – Teacher at the Conservatory of Bari

Since 2009 – Teacher at the Conservatory of Santa Cecilia, Rome, where he teaches “Piano practice and reading”.